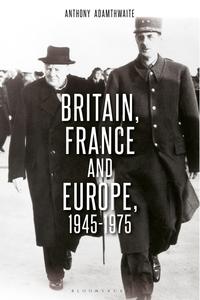 Britain, France and Europe,1945-1975 : The Elusive Alliance challenges standard narratives of postwar Europe. The sidelining of Britain and France in the Cold War era, argues Adamthwaite, was preventable. A Franco-British Europe came within a whisker of realization. A marriage powering the Community could have repositioned Western Europe as partner, not client of the United States.

The portrayal of  French President Charles de Gaulle as an intransigent gatekeeper determined to keep Britain out of the European Community created a convenient alibi for self-inflicted missteps. UK bids for Community membership ignored the elephant in the room - the need for partnership in a superpower age.

“A wide-ranging, wise and witty account of the tricky relationship between the 'odd couple' Britain and France in the postwar period. Based on a lifetime of writing history but wearing his learning lightly, Adamthwaite opens up new insights and invites us to reflect on how difficult it was for Britain to sign up to the European project.” –  Robert Gildea, Professor of Modern History, University of Oxford, UK